T (Teen)
Vigilante 8: 2nd Offense (known as Vigilante 8: 2nd Battle, ヴィジランテ8〜セカンドバトル〜, in Japan) is the second installment in the Vigilante 8 vehicle action series developed by Luxoflux. It was released in 1999, a year after its predecessor, for the Nintendo 64, Playstation, and Dreamcast. It centers around Slick Clyde's attempt to travel back into the past and finish what Sid Burn had failed to do in the previous game.

Vigilante 8: 2nd Offense takes place in the year 2017, Slick Clyde, under the new alias, Lord Clyde, has become a high-ranking official for the controversial oil monopoly OMAR, but he desires more power. To do so, he sent two of his assassins, Obake and Darius, to steal a time-travel device from Stanford University and uses it to travel back in time to 1977, shortly after Sid Burn's demise. His prime objective: to kill Convoy, and is successful in doing so after an attack on Convoy's truck results in him falling off a cliff to his death. Yet Houston, who was with him at the time, survives. After Convoy's death, Lord Clyde went on to finish what Sid Burn failed to accomplish.

The gameplay in Vigilante 8: 2nd Offense is identical to the gameplay in Vigilante 8, save for a few added features. In this game, a roster of new characters and old characters are presented, with five additional characters more than its predecessor. New features are also presented, such as Custom Paint, which allows you to customize the color and brightness of a character's vehicle, which can be changed at any time. It also introduces Salvage Points, which are symbols that appear after destroying an opposing vehicle, and when enough are collected, vehicles get added equipment to their bodies that serve no purpose but to display. This is the first game to introduce Vehicular Transformations, which aid in adapting to the player's environment. Finally, this is the first game to introduce the Drifters, a faction that isn't necessarily a team or alliance, but more of a group of characters whom are a part of the Auto Wars for their own purposes and have no real allies or enemies. 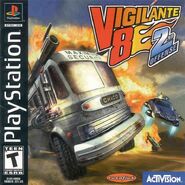 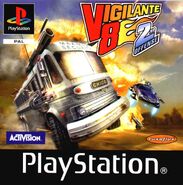 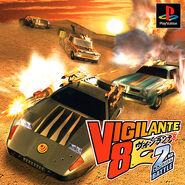 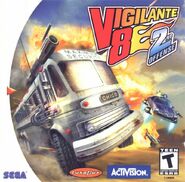 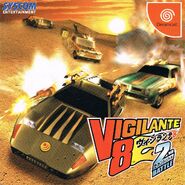