Slick Clyde is a fictional character in the vehicular-action series, Vigilante 8. 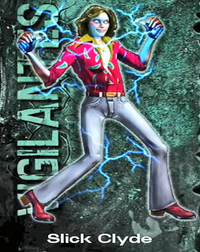 Not much is known about Slick, though the Vigilante 8 booklet labels him as a playboy. In the opening scene of the first game, he helped Convoy and his Vigilantes fight Sid Burn and his Coyotes at a military weapons depot. It is here that Clyde discovers a Lightning Dispensing Apparatus (which he thought was a cool antenna). This becomes his staple weapon in the first game. According to his Vigilante 8 Quest, Slick had little interest in joining the Vigilantes, but John Torque bullied him into it. He also stated that if it weren't for John, he would have tried overthrowing Convoy and become leader himself, foreshadowing his love for power. His ending in the game is considered canon.

In V8: 2nd Offense, Clyde makes a return, but as a frail old man who travels to the past from the year 2017. It is revealed that he rose through the ranks of OMAR to become its new CEO. In his time, people were becoming less dependent on oil (possibly due to less expensive and more efficient fuel sources) and, after the events of 1977, OMAR just didn't have good standings with the public. It was also revealed that Clyde was slowly dying and many people believed that OMAR would die with him. To counter this belief and as his last hoorah, Clyde orders his best assassins, Obake and Darius, to infiltrate Stanford University and steal prototype Time Displacement Capsules. Clyde's plan was to go back to the 1970's, when OMAR had a chance to put America out of business, as well as revive the Coyote auto gang and destroy the Vigilantes.

In his V8 ending, Clyde finds Houston 3's armband in a roadside bathroom and puts it on. An aura of lightning surrounds him as he stumbles out of the bathroom with his eyes glowing an ominous red. A newspaper clipping surfaces revealing his picture and him quoted saying "Long live OMAR!" The bottom of the paper reads, "Slick Clyde New Leader Of Coyotes".

In his V8: 2nd Offense ending, Clyde wakes up handcuffed in his limo in the passenger's seat with Obake next to him driving. Realizing he is back in the future, he turns to Obake and deduces her a traitor. Obake then sets the limo's autopilot to drive straight into the OMAR Empire and prepares the vehicle's weapons for firing as she bails out and lets the limo explode with Clyde in it, killing him and destroying OMAR.

In V8, Clyde piloted the 1970 Clydesdale. It had all-around good stats, while somewhat lacking in avoidance.

In V8: 2nd Offense, Clyde returned in the stylish Excelsior Stretch Limo. The vehicle was a tad slower than the Clydesdale, but had a bit stronger armor.

In V8, Slick Clyde's Special Weapon is White Lightning. When fired, a ball of electricity is shot up in the air and rains down on the nearest vehicle, damaging and stalling it.

In V8: 2nd Offense, Lord Clyde's Special Weapon is Chain Lightning, a weapon that shocked a nearby vehicle while suspending it in mid-air. If another vehicle was near, the lightning would create a "chain" and jump from one car to the next.

Community content is available under CC-BY-SA unless otherwise noted.
Advertisement